After the war the government was tasked with finding jobs for all those soldiers returning from war and with no job to go to. My Dad, Rebert William Bedford was offered the job of bus conductor, which he gladly accepted as he had not had much formal education (he left school at 14 with no qualifications).

I think it must have been shortly after his period as a bus conductor that Dad joined Lebus. Dad was a warehouse-man based initially at the Tottenham depot. He was also a dab hand at French Polishing so maybe he did that too.

I think it would have been 1952 that we all moved down to Woodley, I was 2 and my sister Jen 6. Lebus had a warehouse there, it was situated on the old Woodley Aerodrome which had served as an RAF training school prior to, and during WW2. I believe it was there that the WW2 veteran Douglas Bader crashed his plane. Despite losing both legs he went on to become an ace fighter pilot. Anyone interested should look up the old black & white film “Reach for the Sky” – circa 1956, which tells his story with Kenneth Moore playing the lead role.

The hangers, previously used for aircraft made a perfect storage facility for the large wardrobes etc. ready for dispatch to customers, below is the only photo we have of Dad at the warehouse. For me this was a truly enchanting period of my life. We lived in the Flying School, which was enormous, we even had a playroom big enough to skate inside! I remember exploring the old outbuildings that were full of aircraft parts. I later regretted not being older because there were enough parts to build my own aeroplane! As the airfield was our back garden, Dad & I would go mushroom picking at about 6am on Sunday mornings, they were then served up with eggs & bacon for Sunday breakfast.

In 1956 we moved back to Tottenham as Dad returned to Finsbury Works – expanding with a new depot on the North side of Ferry Lane. I joined the Harris Lebus Boxing Club when I was 14, with Dad as my coach and subsequently I did win the Tottenham Grammar School boxing championship, but the novelty soon waned after a couple of heavy defeats! I think that saddened Dad but Mum was delighted.

I’ve created a blog relating to my family history and will be sure to add any further Lebus related information that I discover. 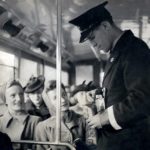 Prior to employment at Lebus 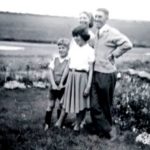 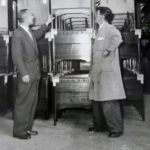 Robert W Bedford to the right 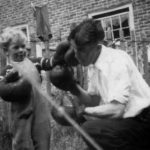