I have been in road transport since 1957 when I became a conductor on the Eastern National on the 251 road from Wood Green down to Southend, eventually going driving. I left the EN in 1962 going onto Lebus to do long distance driving. I left Lebus and went onto DH Transport again to do long distance, eventually I left DH and went down to Cornwall and worked down South Crofty as a tin miner and learnt to handle dynamite and blasting. I eventually finished up back in London working as a driver for London Transport, all this had taken 23 years.

I started to collect models and I tried to find a model maker to make for myself a model of some of the vehicles that I had driven over the years. It took me until early this year (2017) to find a model maker that could, it happened quite by accident, I was on eBay when I came across this particular site advertising a 1/76 Routemaster [RML 2403] on the N96 road out of the Leyton garage, a bus that I had driven on that route.

I bought a few more from Chris Lambert (LT bus specialist) and eventually asked him if he could do a few more, he did about thirty LT buses all from Leyton and three EN buses on the 251 route, all the vehicles that I had driven got the correct index numbers and the correct routes numbers in my time on PSV (public service vehicle) work. I wanted some of the various lorries that I had driven in my commercial years on the road so I asked Chris it would be passable to recreate some Lebus lorries in model form, he agreed that it would.

Back to eBay to find suitable models to turn into Lebus, Corgi do a TK Bedford in Pickford’s livery which would be quite suitable as a vehicle to work with, Chris got four vehicles to make two Lebus, he cuts the body into three, uses the front with the luton puts in a middle and puts the back with the roller shutter onto the front and middle to get the correct length of the body. The next step is to do the same with the chassis then the whole thing is glued together and filled then it is sprayed grey, the decals Chris got from a friend of his who made them up on his computer from some photographs that I sent to him, so basically the models are a cut and shut job something like we did to cars when we were kids!

The only lorries that he did not cut in half were the two artics, we left them as they were, Chris did the same with the DH Transport fleet.

Once the lorries started to arrive I needed somewhere to show them so the Lebus loading bays followed, then the DH Transport garage, all done by searching through eBay for many hours, looking for suitable parts to build a diorama, nearly all the parts came from the UK (I am now living in Canada). 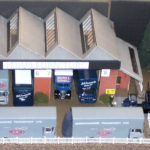 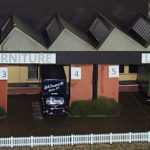 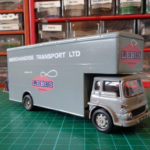 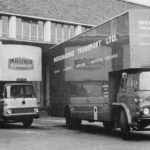