In 1975 the Mosquito Museum (now de Havilland Aircraft Museum) at Salisbury Hall, London Colney recovered the cockpit and central fuselage of an Airspeed Horsa glider from the Oxfordshire farm where it had lain since 1949. The museum occupies the site where the prototype Horsa was designed and built in 1940/41 in close collaboration with Harris Lebus – indeed, it has been said that Herman Lebus was almost an honorary member of the design team.

In recent years, the DHAM Horsa exhibit had become slightly overlooked and in 2021 a small restoration team was tasked to revive the exhibit and continue to conserve this historically significant airframe – no complete original WW2 Horsa survives today. ‘HL’ markings inside the fuselage revealed that it was built by Harris Lebus and the team quickly realised that skilled and careful restoration work will be needed to preserve the typical (and very impressive) ‘concentric’ and ‘spiral’ plywood – much of which looks as it did when it left the Tottenham Hale factory nearly 80 years ago.

This has quickly grown into a ‘project’ involving research as much as woodworking. Help has come from many quarters and an unexpected donation of unique and valuable archive material has revealed much about the early development of what was, at the time, the largest and heaviest unpowered transport aircraft ever built.

This is very much a ‘work in progress’ and visitors can enjoy a close-up view at the museum which is close by junction 22 of the M25. The Horsa shares the same hangar as three complete dH Mosquitoes which, of course, also feature in the HL story……. 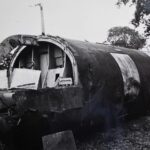 DHAM Horsa as found in 1975 at Apple Tree Farm 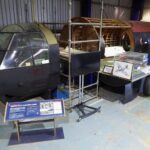 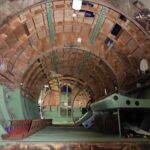 Inside the Harris Lebus fuselage – November 2022 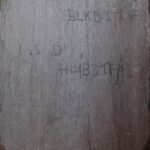 HL marking in the fuselage 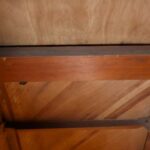 Spiral & concentric plywood in the fuselage