Ernest Frederick Powell, was born in 1908 and married Doris Winn in 1936 age 28. I do not know when he started at Harris Lebus but on his marriage certificate his occupation is shown as Production Engineer and I believe he would have been working for Harris Lebus at that time. On the 1939 Register his occupation is shown as Engineer and Rate Fixer and Controller of Signals and Cases, Harris Lebus, Tottenham. My sister remembers that during WW2 Harris Lebus were involved in aircraft production. I believe my father’s occupation at some time was in time and motion study at Harris Lebus. I still have four Lebus dining chairs which have been refurbished but are still in use.

My father was involved with the visit of the Duke of Edinburgh to Harris Lebus in 1955 and I have a photo of him behind the Duke which may be of interest. I was born in 1946 but I don’t have any recollection of going to any of the Christmas Parties but may have done. I have a photo of my parents at a dinner, date unknown, Ernest is 2nd from left and Doris 2nd from right. Other photos are of a group outside the Harris Lebus sports pavilion dated 9th September 1959 and a photo of my father on the steps of a Bar/Restaurant somewhere unknown.

My father died in 1964 age 58, whilst working at Harris Lebus. It may be too long ago but if anyone remembers him, or has any further information, I would be pleased to hear from them. 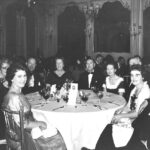 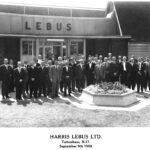 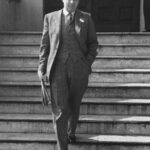