My father (William Moore born 1918) worked for Lebus prior to World War II and on his demob returned to the factory on the shop floor. He lived in Town Road, Edmonton prior to his marriage in 1942 and then in Bath Road and used to cycle to work from there each day.

My brother and I attended the children’s Christmas parties (see photograph below) that’s my brother and me (front row) second and third from left. It must have been taken about 1955 or so. I have vague memories of watching some sort of variety act and one of the manager’s daughters (who was into dancing) did the Can-Can! Also one year they had a military band and all the kids marched up and down the hall behind them! I can also remember going to the Circus (possibly at Olympia) with the Social Club. Couldn’t have been that old as the coach got back too early and my brother and I had to sit on the kerb for what seemed like hours till dad arrived to pick us up! He was a bit cross that we had been left alone on a dark evening! Enjoyed the circus though but was more interested in the flea circus (did that trigger my love today of all things miniature?). Happy days. 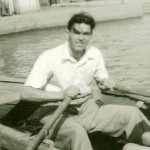